Meet our team! We are all looking forward to welcoming you to the Iron Mountain Hot Springs in scenic Glenwood Springs, Colorado. Please feel free to contact us anytime with questions or suggestions. We hope to see you relaxing in one of our hot springs pools soon.

Steve and Jeanne Beckley are hikers, skiers, and outdoors adventurers. Steve grew up on the Western Slope in Colorado and graduated from the Colorado School of Mines with a BS in Petroleum Engineering. Jeanne was raised in Minnesota and graduated from Gustavas Adolphus College in St. Peter, Minnesota, with a BA in Math and Computer Science. Steve began working in the petroleum industry and Jeanne in the information technology industry.

After 16 years in their respective fields, they decided that they wanted to live in a smaller town, wear jeans and hiking boots to work instead of suits, and raise their children in a more laid-back rural atmosphere. That was 1999, when they opened Glenwood Caverns and the Historic Fairy Caves to the public. It first opened to the public in the late 1800s, but had been closed since 1917. Today, Glenwood Caverns Adventure Park is a thriving vacation destination.

Steve and Jeanne are now eager to help bring another historic Glenwood Springs site back to life with the opening of the Iron Mountain Hot Springs. Together, they bring a passion for community and dedication to service to the team.

Mogli grew up in Lucerne, Switzerland, until the age of 20, then she packed her bags and headed West, far West until she came to a country where the streets were promised to be paved with gold! Her 20+ years of selling Real Estate brought her to the blank canvas of Iron Mountain Hot Springs’ land – 13 acres along the Colorado River just waiting to become a Hot Springs Resort. She is now branching out into Real Estate Development.

She brings to the team a love for creating something that everyone can enjoy, putting her talents and experience to work to add another attraction to Glenwood Springs’ already incredible variety. This undertaking was like raising a child. Now it’s ready to take flight and she’s entrusting the future of this child into the hands of all the employees of the Iron Mountain Hot Springs who will nurture and tend it. Her philosophy? Humor is allowed! Humor should be mandatory as a smile adds kindness to your voice.

Colorado native David “Coop” Cooper moved to Glenwood Springs in 1978 after graduating from the University of Northern Colorado in Greeley to enjoy the skiing, golf and everything else that the mountains of Colorado have to offer. Coop is retired now has been ecstatically married to Mogli Cooper since 2006

Aaron was born in Grand Junction, CO and has always had a love for Glenwood Springs as a child.  After graduating High School, Aaron left Grand Junction for the Big City (Denver) to study to become a chef.  He attended Johnson & Wales University earning an AS in Culinary Arts and a BS in Food Service Management.  He has the amazing opportunity to work at The Broadmoor, The Little Nell and Disney World, as well as many other restaurants in the Denver area.  His passion for food has always been strong, but missed customer service interactions.

After graduation he moved on to work at Whole Foods Market as a Fish Monger in Denver.  There I could speak with customers, teach people how to cook and still work with food. In 2012 he moved to the Roaring Fork Valley to open up the Whole Foods Market in Basalt as the Associate Store Team Leader. After several years he moved on to his next journey and joined the Iron Mountain Hot Springs team as the Operation Manger in October of 2018.  Now the General Manger, he enjoys the experiences our guest gets when they arrive.  From the daily pass holder that swings in before or after work, to the young couple that just got married, or the family that hasn’t had a vacation in years. People come here for the same thing and I am proud to be a part of that. Happily married with two young children, Aaron enjoys spending time with his family, fly fishing, biking, snowboarding, camping or homebrewing beer. Stephanie joined the Iron Mountain Hot Springs team from the east coast and spent most of her childhood in South Georgia. She graduated from Valdosta State University and studied business management and marketing. During college, she started working at Wild Adventures Theme Park and worked directly in the admissions, aquatics, attractions, and human resources departments. She then took the opportunity to be the Guest Experience Manager at Fifth Third Bank Stadium with Kennesaw State University’s Department of Event and Venue Management.

When Stephanie is not at work, she enjoys being outdoors or in the kitchen experimenting with baking and new recipes. Although she isn’t from a state that gets snow, Stephanie is excited to try winter sports in Colorado. Landon was born and raised in the Black Hills of South Dakota, where he spent a lot of his time outdoors exploring the wooded wilderness. Landon has worn many hats, from a line cook to running a bar and restaurant, but he always seems to find his way back to the water. He became a lifeguard and began teaching swim lessons and lifeguard training.

After graduating from Black Hills State University with a BS in Biology, Landon moved to Glenwood Springs and fell in love. During his first year in Colorado he became a raft guide, guiding guests through the beautiful Glenwood Canyon. Now being the Maintenance Manager at Iron Mountain Hot Springs, he is around the water all day, which is his passion. When not working, Landon enjoys being with his family and exploring the outdoors no matter the season. 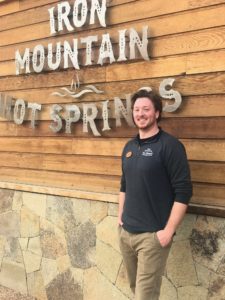 Lynnsey was born and raised in Dallas, Texas and often visited Colorado with her family growing up. After graduating high school, she moved to the valley to attend Colorado Mountain College. Lynnsey graduated with a degree in Professional Photography in May of 2015. Before joining the Iron Mountain Hot Springs team, she worked as the front-end team leader at Whole Foods Market in Basalt. When she isn’t working you can find her attending live music events, playing in the mountains, and spending quality time with her husband, friends and cat. Eric grew up Kansas City, Kansas, and still loves the barbecue. This K-State Wildcat studied human resources management at Kansas State University. Before joining Glenwood Caverns Adventure Park in 2008 and then the Iron Mountain Hot Springs in 2014, he worked in human resources for the Aspen Skiing Company for almost four years and at a ski shop in Summit County, Colorado, for three years. He enjoys spending time with his wife and two young children, gardening and sports — as he puts it, “anything with a score.”

Eric chose Glenwood Caverns Adventure Park because it was a smaller, more intimate company where he could know everyone. He brings excitement, energy and support to the team to allow all employees to achieve their goals.

Born and raised as a Midwesterner (Rockford, Illinois), I was drawn to Colorado after enjoying many holiday ski trips in the beautiful Colorado Rockies.  Immediately after college (Western Illinois University) and having majored in Parks and Recreation Administration, I knew that I wanted to work in the hospitality business and inspire others to have fun and enjoy life.  Initially, the hotel industry was a good fit and I spent several years working  in hotels such as Ramada Inn, Breckenridge Hilton, and the Silverthorne Lodge.  My interest in computers and technology set in motion a career in Internet Marketing and I spent 10 years with Blizzard Internet Marketing which involved marketing for the hospitality industry.  In November 2015, my blended experience of the hospitality and marketing brought me to Glenwood Caverns Adventure Park and Iron Mountain Hot Springs.  I am incredibly lucky to be working for such great leaders and an awesome team.  I always look forward to summers to take in the beautiful Colorado scenery by way of camping and rafting with my husband and two daughters.